I am a bit late on this (I have family over for the weekend) but on the off chance you have not seen it, make sure to check out the notes from the interview of Phil Jones of the CRU.  Here is the BBC Q&A.    Anthony Watt has as good a summary as anyone.

Specifically, the Q-and-As confirm what many skeptics have long suspected:

I think some of these conclusions are a bit of a reach from the Q&A. I don’t get the sense that Jones is abandoning the basic hypothesis that climate sensitivity to manmade CO2 is high (e.g. 3+ degrees per doubling, rather than <=1 degrees as many skeptics would hypothesize).  In particular, I think the writing has been on the wall for a while that alarmists were bailing on the hockey stick / MWP-related arguments as indicative of high sensitivities.

The new news for me was the admission that the warming rate from 1979-present is in no way unprecedented.  This is important as the lead argument (beyond black box “the models say so” justifications) for blaming anthropogenic factors for recent warming is that the rate of warming was somehow unprecedented.  However, Jones admits (as all rational skeptics have said for some time) that the warming rate from 1979 to today is really no different than we have measured in other periods decidedly unaffected by CO2.

I have made this argument before here, with the following chart: 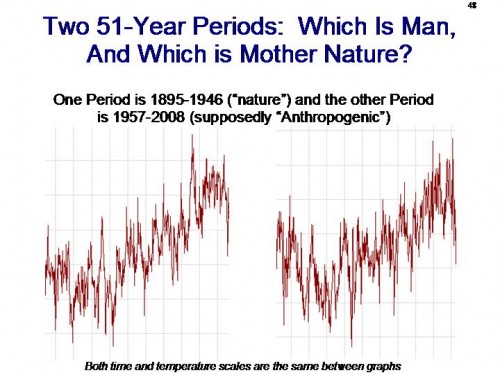 Here, by the way, was my attempt to explain the last 100 years of temperature with a cyclical wave plus a small linear trend (my much more transparent and simple climate model) 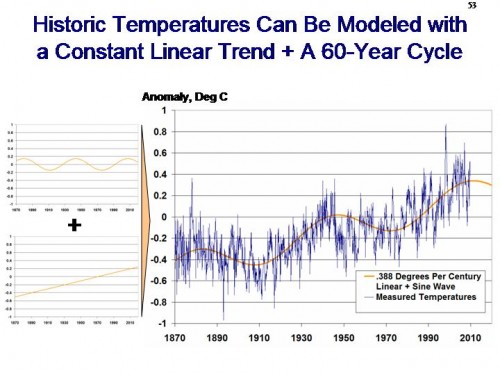 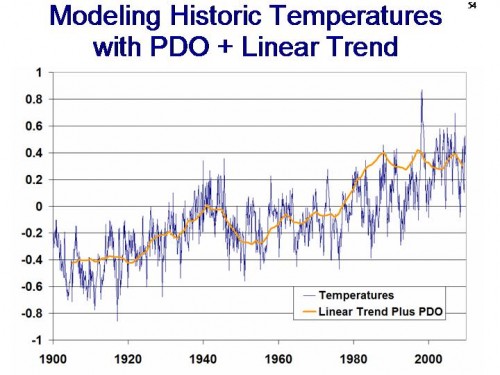