It turns out there is a parallel story with land-based ice and snow.  First some background

As most folks know, melting sea ice has no effect on world ocean heights — only melting of ice on land affects sea levels.   This land-based ice is distributed approximately as follows:

Glaciers around the world: 1%

I won’t go into glaciers, in part because their effect is small, but suffice it to say they are melting, but they have been observed melting and retreating for 200 years, which makes this phenomenon hard to square with Co2 buildups over the last 50 years.

I am also not going to talk much about Greenland.  The implication of late has been that Greenland ice is melting fast and such melting is somehow unprecedented, so that it must be due to modern man.  This is of course slightly hard to square with the historical fact of how Greenland got its name, and the fact that it was warmer a thousand years ago than it is today.

But I am sure you have heard panic and doom in innumerable articles about 11% of the world’s land ice.   But what about the other 89%.  Crickets?

This may be why you never hear anything:

The ice melt across during the Antarctic summer (October-January) of 2008-2009 was the lowest ever recorded in the satellite history.

Such was the finding reported last week by Marco Tedesco and Andrew Monaghan in the journal Geophysical Research Letters:

A 30-year minimum Antarctic snowmelt record occurred during austral summer 2008–2009 according to spaceborne microwave observations for 1980–2009. Strong positive phases of both the El-Niño Southern Oscillation (ENSO) and the Southern Hemisphere Annular Mode (SAM) were recorded during the months leading up to and including the 2008–2009 melt season. 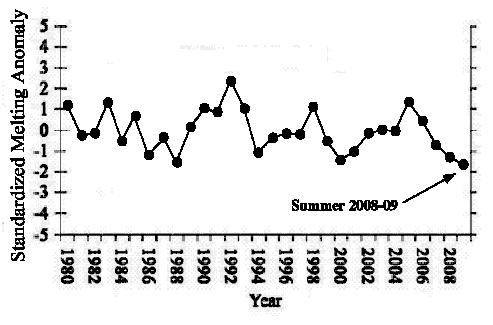 Figure 1. Standardized values of the Antarctic snow melt index (October-January) from 1980-2009 (adapted from Tedesco and Monaghan, 2009).

The silence surrounding this publication was deafening.

By the way, in case you think there may be some dueling methodologies here – ie that the scientists measuring melting in Greenland are professional real scientists while the guys doing the Antarctic work are somehow skeptic quacks, the lead author of this Antarctic study is the same guy who authored many of the Greenland melting studies that have made the press.  Same author.  Same methodology.  Same focus (on ice melting rates).  Same treatment in the press?   No way.  Publish the results only if they support the catastrophic view of global warming.