One of the panicky claims of global warming catastrophists is that some sort of "unprecedented" melting and retreat of glaciers is occurring tied to anthropogenic global warming.  I have seen anecdotal evidence for a while that this melting of glaciers began long before the 1950-present "anthropogenic" era, but I had not seen anything systematic on the topic until I discovered this study by  L. Oerlemans et al as published in Science in 2005.  Download Oerlemans 2005 as pdf.  His results look like this (click to enlarge):

His data for the last decade is a little squirrelly because the data sets he uses are slow to update, but the overall picture is pretty clear — a pretty steady 150+ year history of steady retreat, with the only change is slope being a flattening rather than an acceleration of the curve.  Here are a few individual glaciers he highlights: 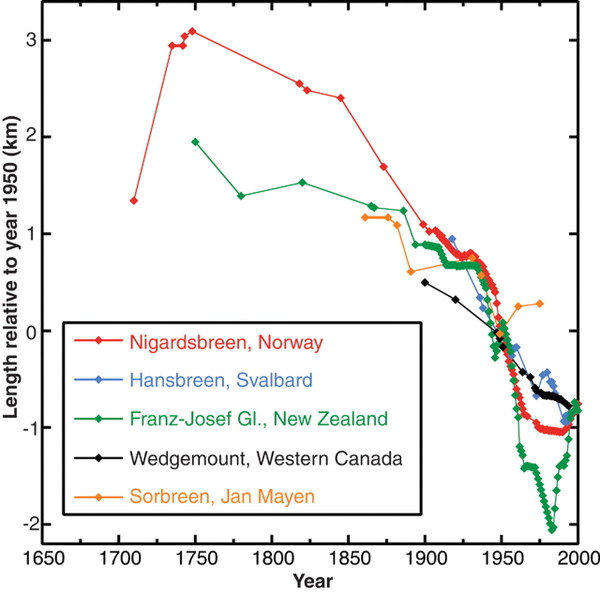 One is again left in a quandary – if recent glacial retreats are due to anthropogenic warming, then what cased the retreats before 1950 or so?  And, whatever caused the earlier retreats, what made this natural effect "switch off" at the exact same instant that anthropogenic effects took over?

Update:  Here is a piece of annecdotal evidence to match, a map from Alaska Geogrpahic on the retreat of the glaciers at Glacier Bay 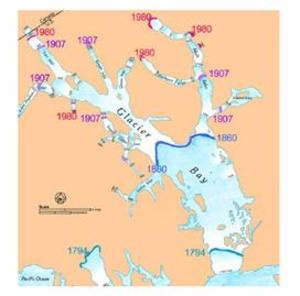