The New Scientist (“new” in most magazine titles meaning “socialist”) has yet another whole issue aimed at slamming climate skeptics.  You might start to think they felt threatened or something.

I found the cover hugely ironic: 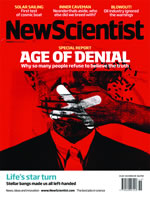 The implication I guess is that climate skeptics are somehow trying to silence real scientists.  This is enormously ironic.  With a couple of exceptions, including the unfortunate legal crusade by the Virginia AG against Michael Mann, it is climate alarmists rather than skeptics who have generally taken the position that the other side of the debate needs to be silenced.

By the way, as I said in the intro to my last video, I have chosen to embrace the title of denier – with one proviso.  Being a denier implies that one is denying some kind of proposition, so I am sure thoughtful people would agree that it is important to be clear on the proposition that is being denied.  For example, I always found the term “climate denier” to be hilarious.  You mean there are folks who deny there is a climate?

I don’t deny that climate changes – it changes all the time.  I don’t deny there is global warming – global temperatures are higher today than they were in 1900, just as they were higher in 1200 AD than they were in 900.  I don’t even deny that man is contributing somewhat to the warming, not just from CO2 but from effects like changes in land use.  What I deny is the catastrophe — that man’s actions are leading to catastrophic changes in the climate.  I believe many scientists have grossly over-estimated the sensitivity of temperatures to CO2 by grossly overestimating the net positive feedback in the climate system.  And I think much of the work assigning consequences to even small increases in global temperatures – from tornadoes to hurricanes to lizard extinction – is frankly crap.  While I think the first mistake (around sensitivity) is an honest error, some day scientists will look back on the horrendous “science” of the consequences of warming and be ashamed.

It strikes me that a real scientific magazine that was actually seeking truth would, if it wanted to dedicate a whole issue to the climate debate, actually create a print debate between skeptics and alarmists to educate its readers.  If the alarmist case is so obvious, and its readers so smugly superior in their intellect, surely this would be the most powerful possible way to debunk skeptics.  Instead, the New Scientist chose, in a phrase I saw the other day and loved, to take a flamethrower to a field of straw men.

For those who want to watch the straw men go up in smoke, The Reference Frame has an index to the articles in this issue.