Will there ever be a time when sane people are not having to deconstruct yet another repackaging of Mann’s hockey stick, like some endless wack-a-mole game?  Mann is back with a new hockey stick and, blow me away with surprise, it looks a heck of a lot like the old hockey stick: 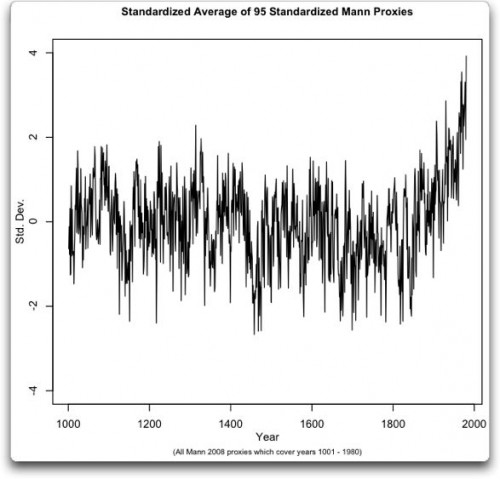 Willis Eschenbach, writing at Climate Audit, outlines a new statistical approach he claims can help determine the signal-to-noise ratio in such a multi-proxy average, and in turn determine which proxies are contributing the most to the final outcome.

His approach and findings seem interesting, but I need to withhold judgment and let the statistical geeks tear it apart.  I am always suspicious of algorithms that purport to sort or screen samples in or out of a sample set.

However, his climate-related finding can be accepted without necessarily agreeing with the methodology that got there.  He claims his methodology shows that two sets of proxies — the Tiljander sediments and the Southwestern US Pines (mainly the bristlecones) — drive the hockey stick shape.  This is reminiscent of Steve McIntyre’s finding years ago that just a few proxies in the original MBH 1999 drove most of the hockey stick form.  Interestingly, these two series are the very ones that have received the most independent criticism for their methodology and ability to act as a proxy.  In particular, the Tiljander Lake sediment data is out and out corrupted, and it is incredible that they could get past a peer review process (just reinforcing my feeling that peer review passes shoddy work that reinforces the professions prejudices and stands in the way of quality work by mavericks challenging the consensus).

Anyway, with these proxies removed, less than a quarter of the total, the hockey stick disappears. 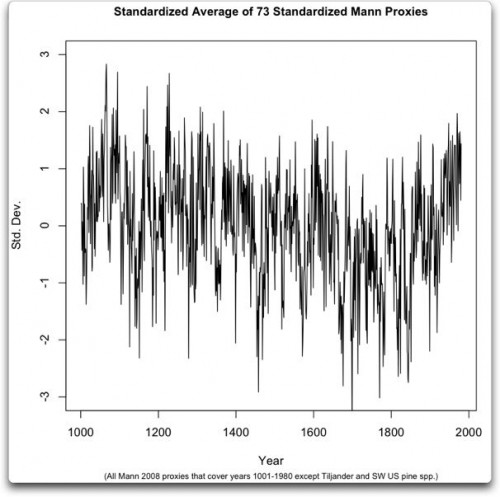 Update: If you still have any confidence at all in climate scientists, I urge you to read this discussion of the Tiljander sediments.  Mann managed to make two enormous mistakes.  One, he used a series that the authors of the series very specifically caution has been disturbed and is not a valid proxy for the last 200-300 years.  And two, he inverts the whole series!  instead of showing it decreasing in the last 200 years  (again due to corruption the authors warned about) he shows it upside down, increasing in the last 200 years, which then helps him build his hockey stick on absolutely false data.

One might argue that this is just the indictment of one scientist, but everyone in the profession seems to rally around and defend this one scientist, and the flaws listed above have been public for a while and absolutely no one seems interested in demanding Mann correct his numbers.  In fact, most climate scientists spend their time shooting the messenger (Steve McIntyre).

17 thoughts on “Deconstructing the Hockey Stick”