I have written on a number of occasions that, years from now, folks who would like to see meaningful reductions in man’s negative impacts on the environment are going to look back on the global warming charade as a disaster for their movement — not just in terms of credibility, but in terms of lost focus on real, meaningful improvements.

China is a great example.  Like London in the 19th century or Pittsburgh in the early 20th, China’s air quality is a mess.  Real steps need to be taken to clean up the air, for the health and safety of its residents.  The Olympics might have been a venue for people around the world to apply pressure to China to clean up its act.

But, in fact, there is little real pressure from outside for China to clean up the soot, unburned hydrocarbons, NO2, SO2 and other such pollutants from its vehicles and coal plants.  That is because all the pressure, all the attention, is on China’s CO2 production.  But there is nothing China can do to slow down CO2 growth without killing its economy and probably destabilizing its government in the process.  So, it gives the world a big FU to such admonitions.

Which is a shame.  Unlike for CO2 abatement, there are real technologies that are proven to be economic that can abate the worst of China’s pollution problems.  Had we instead been spending our moral capital pressuring China to take such steps, there might be real progress.

This is all the more true as we learn that some of the problems we ascribe to CO2 may in fact be more linked to soot from Chinese industry.  John Goetz recently linked one such story:

Smog, soot and other particles like the kind often seen hanging over Beijing add to global warming and may raise summer temperatures in the American heartland by three degrees in about 50 years, says a new federal science report released Thursday.

These overlooked, shorter-term pollutants — mostly from burning wood and kerosene and from driving trucks and cars — cause more localized warming than once thought, the authors of the report say.They contend there should be a greater effort to attack this type of pollution for faster results.For decades, scientists have concentrated on carbon dioxide, the most damaging greenhouse gas because it lingers in the atmosphere for decades. Past studies have barely paid attention to global warming pollution that stays in the air merely for days.

This is consistent with other recent work that hypothesizes that increase of melting rates of Arctic sea ice may be as much due to Chinese black carbon falling on the ice  (and thereby decreasing its albedo and increasing solar heating) than from rising global temperatures.  This makes sense to me, and may help explain why melting in the Arctic sea ice was nearly as great as last year’s record, despite much lower Arctic temperatures (see below) over the last year. 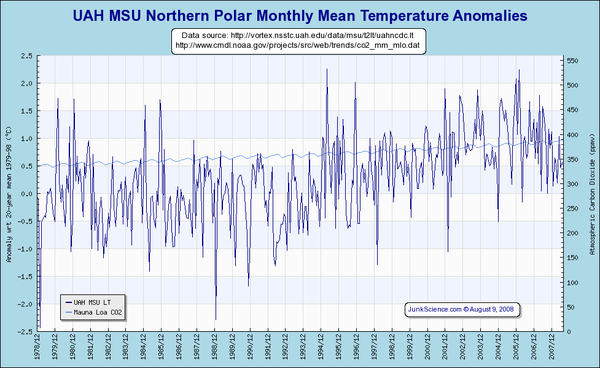 16 thoughts on “Sucking the Oxygen Out of the Environmental Movement”