OK, I would have assumed that the title for this post was obvious to all:  There are a lot of reasons that trees don’t make very good thermometers.  Now, that is not a criticism of climate archaeologists who use tree rings to infer the historical temperature record.  Sometimes, we have to work with what we have.  Historians are the first to admit that coins are not the best way to deduce history, but sometimes coins are all we have.

But when historians rely on imperfect evidence, there generally is an understanding that the historical record created from this evidence is tentative and subject to error.  Unfortunately, some climate scientists have lost this perspective when it comes to tree-ring analyses, such as Mann’s hockey stick.  They tend to bury the fact that:

“There are reasons to believe that tree ring data may not capture long-term climate changes (100+ years) because tree size, root/shoot ratio, genetic adaptation to climate, and forest density can all shift in response to prolonged climate changes, among other reasons.” Furthermore, Loehle notes “Most seriously, typical reconstructions assume that tree ring width responds linearly to temperature, but trees can respond in an inverse parabolic manner to temperature, with ring width rising with temperature to some optimal level, and then decreasing with further temperature increases.” Other problems include tree responses to precipitation changes, variations in atmospheric pollution levels, diseases, pest outbreaks, and the obvious problem of enrichment that comes along with ever higher levels of atmospheric carbon dioxide. Trees are not simple thermometers!

When the tree-ring folks like Mann first did their analyses, they calibrated tree ring growth over recent decades with the recent historical temperature record, and then projected this calibration backwards on history.  But, as noted in the quote above, there is a lot of evidence that these calibration factors may not be linear over time.  And in fact, the few people that have gone back and resampled Mann’s trees have found that their growth diverges substantially from predicted values – in other words, the relationship between tree ring growth and temperature is not constant.

Now, this does not make Mann and his peers bad scientists.  They were trying their best to reconstruct history, they tried one methodology, but then evidence mounted that this methodology is flawed.  What makes them potentially bad scientists is their reaction to the negative evidence.  Once evidence of the divergence problem was raised, scientists have simply ceased resampling trees.  Their focus hs become defending their original approach, rather than improving it based on new information.

Often, new approaches require new people, as in this case:

Loehle gathered as many non-tree ring reconstructions as possible for places throughout the world (Figure 1). There are dozens of very interesting ways to peer into the climatic past of a location, and Loehle included borehore temperature measurements, pollen remains, Mg/Ca ratios, oxygen isotope data from deep cores or from stalagmites, diatoms deposited on lake bottoms, reconstructed sea surface temperatures, and so on. Basically, he grabbed everything available, so long as it did not rely on trees.

And he got this plot for a temperature reconstruction: 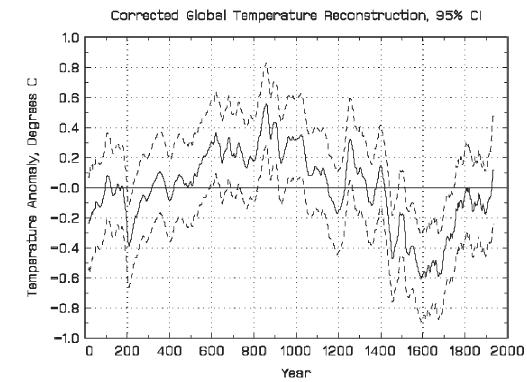 Only time will tell if this approach holds up better than tree rings, but it does better match the annecdotal history we have, including a Medieval warm period where Greenland was, you  know, green and a little ice age in the 17th century.  Like Mann, Loehle’s first version had some statistical and procedural errors.  Unlike Mann, Loehle reworked the whole analysis when these errors were pointed out.