Via Anthony Watt is this temperature station in Lampassas, Texas, part of the USHCN and GISS data bases (meaning it is part of the official global warming record). 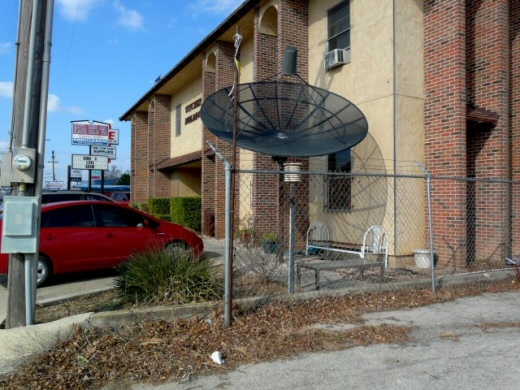 The temerpature instrument is in the white louvred cylindar in teh center.  This installation is wrong in so many ways:  in the middle of a urban heat island, near asphalt, next to a building, near car radiators, near airconditiong unit exhausts.  Could we possibly expect this unit to read correctly?  Well, here is the temperature plot: 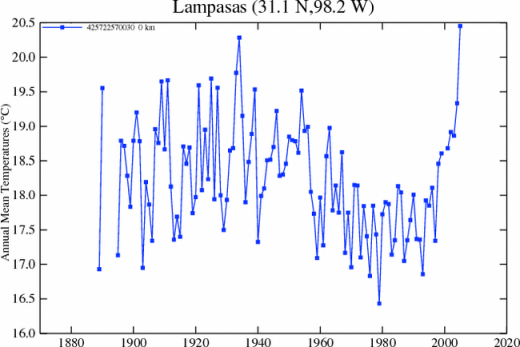 The USHCN data base says that this station moved here in the year 2000.  Hmmm, do you think that the temperature spike after 2000 is due to this site, or global warming.  By the way, the GISS calls it global warming.

But James Hansen and others at the GISS defend this station and others to the death.  In fact, the GISS extrapolates temeprature trends not only for Lampassas but for hundreds of kilometers around this location from this one station.  Hansen has opposed Anthony Watt’s efforts to do a photo-survey of these stations, saying that his sophisticated statistical models can correct for such station biases without even seeing the station.  OK, let’s see how the adjust this station.  Their adjustment is in red: 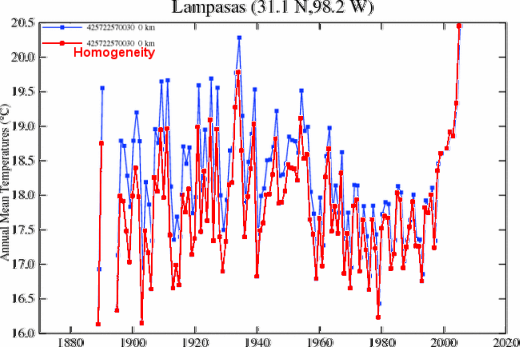 According to the GISS, the temperatures since 2000 have been just fine and without any bias that needs correcting.  However, they seem to think that the temperature measurement in Lampassas in the 1920’s and1930’s (when Lampassas was a one horse town with no urbanization) was biased upwards somehow.  Why?  Well, we don’t know, but based on this adjustment, the GISS thinks this site has LESS urbanization today in this picture than in 1900.   The GISS adjustments have INCREASED the warming seen at this site.  Uh, right.

I think there is some bias that needs correcting, and the place to start may be in the GISS management.