Tired of build-a-volcano junior high science fair projects, my son and I tried to identify something he could easily do himself (well, mostly, you know how kids science projects are) but that would actually contribute a small bit to science.  This year, he is doing a project on urban heat islands and urban biases on temperature measurement.   The project has two parts:  1) drive across Phoenix taking temperature measurements at night, to see if there is a variation and 2) participate in the surfacestations.org survey of US Historical Climate Network temperature measurement sites, analyzing a couple of sites for urban heat biases.

The results of #1 are really cool (warm?) but I will save posting them until my son has his data in order.  Here is a teaser:  While the IPCC claims that urban heat islands have a negligible effect on surface temperature measurement, we found a nearly linear 5 degree F temperature gradient in the early evening between downtown Phoenix and the countryside 25 miles away.  I can’t wait to try this for myself near a USHCN site, say from the Tucson site out to the countryside.

For #2, he has posted two USHCN temperature measurement site surveys here and here.  The fun part for him is that his survey of the Miami, AZ site has already led to a post in response at Climate Audit.  It turns out his survey adds data to an ongoing discussion there about GISS temperature "corrections."

Out-of-the-mouth-of-babes moment:  My son says, "gee, dad, doesn’t that metal building reflect a lot of heat on the thermometer-thing."  You can bet it does.  This is so obvious even a 14-year-old can see it, but don’t tell the RealClimate folks who continue to argue that they can adjust the data for station quality without ever seeing the station.

This has been a very good science project, and I would encourage others to try it.  There are lots of US temperature stations left to survey, particularly in the middle of the country.  In a later post I will show you how we did the driving temperature transects of Phoenix.

Update:  Here is the temperature history from this station, which moved from a more remote location away from buildings about 10 years ago.  I am sure the recent uptick in temperatures has nothing to do with the nearby building and asphalt/black rock ground cover.  It must be global warming. 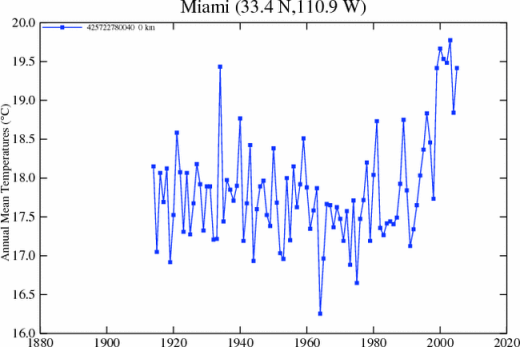