I thought this post by Steve McIntyre at Climate Audit was pretty amazing, even by the standards of climate science.

We begin with a felt need by fear mongers to link CO2 and global warming to bad stuff, in this case a decline of growth or calcification rates on the Great Barrier Reef.  So, abracadabra, some scientist-paladins generate this, which is eaten up by the media: 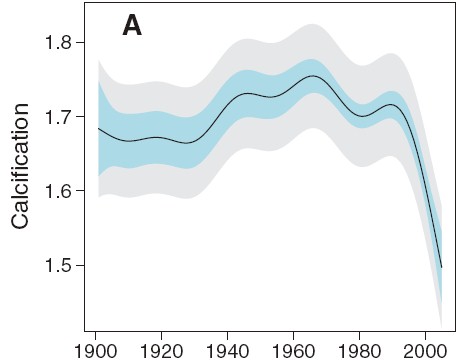 Wow, that looks bad.  And if we stop there, we can write a really nice front-page article full of doom and gloom.  Or we can do some actual science.  First, lets pull back and look at a longer trend: 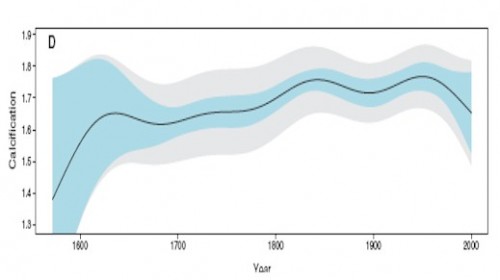 Hmmm.   That looks kind of different.  Like the recent decline is by no means unprecedented, and that in fact one might call the 1850-1950 levels, rather than the recent drop, the anomaly.  This latter is a tough question, of course, in all of climate science.  Just what is normal?

Anyway, we can go further.  McIntyre notices the plot looks awfully smooth.  What if we were to move out of USA Today mode and look at the raw data rather than a pleasantly smooth graph.  This is what we would see:

Wow, that looks really different.  That must be some amazing smoothing algorithm they used.  Because what I see is a generally increasing trend in reef growth, with a single low number in 2005.  Rather than being some change in slope in the whole trend, as portrayed in the smoothing, this is a single one-year low data point.  (It turns out there are several smoothing approaches one can take that put inordinate value on the end point — this was a trick first found in Mann’s hockey stick trying to make hay of the 1998 high temperature anomaly).

I think just looking at the raw data would cause any reasonable person to shake their head and determine that the author’s were grossly disingenuous in their smoothing and conclusions.  But, as they say on TV, “Wait, there’s more.”

Because it turns out the 2005 drop seems to be less a function of any real drop but in fact due to serious gaps in the data set.  The black line is a close-up of the raw growth data, while the pink area is the size of the measurement data set used, with its scale on the right.

Just by the strangest of coincidences, the large drop in 2005 occurs at the same time the number of data points in the data set drops down to 2!  While most of the data has been driven by measurement of 40 or more reefs, the key two years that drive the entire conclusion come from just 2 reefs?  This is the worst possible science.  Most real scientists would have dropped out the last several years and probably would have dropped all the data since about 1990.   Or else go out and get themselves some more freaking data.   It is easily possible, in fact quite likely, that the 2005 drop was due to mix, as high growth measurement site were dropped out of the data set, leaving only lower growth sites in the average.  These changes in mix say absolutely nothing about underlying growth rates.

I am just visually integrating the pink curve, but its reasonable to guess that there are about 600 measurements in the post 1980 period when the averaged trend in the first chart above turns down.  Somehow these guys have come up with a methodology that allows 4-5 measurements in 2004-5 to grossly outweigh the other 600 and pull the whole curve down.  Unless there is something I do not understand, this borders on outright fraud.  This can’t be accidental – the authors simply had to understand the game they were playing here.

Update: Here is another interesting one — An apparent increase spike in ocean heat content: 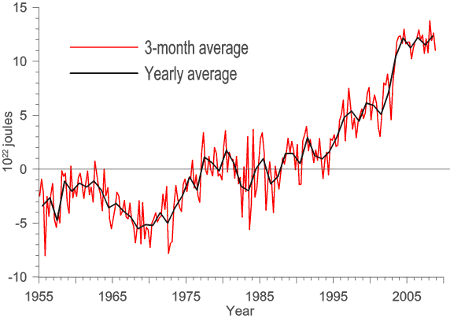 Just coincidentally turns out to exactly coincide with a change in the source for the data.  The jump occurs exactly at the splice between two data sets.  And everyone just blithely accepts this jump as a physical fact??

This is particularly hard to accept, as the ARGO data set (the newer data) has shown flat to declining ocean heat content since the day it was turned on.  So what is the justification for the spike at the splice?

7 thoughts on “How to Manufacture the Trend You Want”