Via William Biggs, Paul Krugman is quoting a study that says there is a 5% chance man’s CO2 will raise temperatures 10C and a 1% chance man will raise global temperatures by 20 Celsius.  The study he quotes gets these results by applying various statistical tests to the outcomes from the IPCC climate models.

I am calling Bullshit.

There are any number of problems with the Weitzman study that is the basis for these numbers, but I will address just two.

The first problem is in looking at the tail end (e.g. the last 1 or 5 percent) of a distribution of outcomes for which we don’t really know the mean and certainly don’t know the standard deviation.  In fact, the very uncertainty in the modeling and lack of understanding of the values of the most basic assumptions in the models creates an enormous standard deviation.  As a result, the confidence intervals are going to be huge, such that about every imaginable value may be within them.

In most sciences, outsiders would use the fact of these very wide confidence intervals to deride the findings, arguing that the models were close to meaningless and they would be reluctant to make policy decisions based on these iffy findings.  Weitzman, however, uses this ridiculously wide range of potential projections and total lack of certainty to increase the pressure to take policy steps based on the models, by cleverly taking advantage of the absurdly wide confidence intervals to argue that the tail way out there to the right spells catastrophe.  By this argument, the worse the models and the more potential errors that exist, then the wider the distribution of outcomes and therefore the greater the risk and need for government action.  The less we understand anthropogenic warming, the more vital it is that we take immediate, economy-destroying action to combat it.  Following this argument to its limit, the risks we know nothing about are the ones we need to spend the absolute most money on.  By this logic, the space aliens we know nothing about out there pose an astronomical threat that justifies immediate application of 100% of the world’s GDP to space defenses.

My second argument is simpler:  Looking at the data, there is just no freaking way.

In the charts below, I have given climate alarmists every break.  I have used the most drastic CO2 forecast (A2) from the IPCC fourth assessment, and run the numbers for a peak concentration around 800ppm.  I have used the IPCC’s own formula for the effect of CO2 on temperatures without feedback  (Temperature Increase = F(C2) – F(C1) where F(c)=Ln (1+1.2c+0.005c^2 +0.0000014c^3) and c is the concentration in ppm).  Note that skeptics believe that both the 800ppm assumption and the IPCC formula above overstate warming and CO2 buildup, but as you will see, it is not going to matter.

The other formula we need is the feedback formula.  Feedback multiplies the temperature increase from CO2 alone by a factor F, such that F=1/(1-f), where f is the percentage of the original forcing that shows up as first order feedback gain (or damping if negative).

The graph below shows various cases of temperature increase vs. CO2 concentration, based on different assumptions about the physics of the climate system.  All are indexed to equal zero at the pre-industrial CO2 concentration of about 280ppm.

So, the blue line below is the temperature increase vs. CO2 concentration without feedback, using the IPCC formula mentioned above.  The pink is the same formula but with 60% positive feedback (1/[1-.6] = a 2.5 multiplier), and is approximately equal to the IPCC mean for case A2.  The purple line is with 75% positive feedback, and corresponds to the IPCC high-side temperature increase for case A2.  The orange and red lines represent higher positive feedbacks, and correspond to the 10C 5% case and 20C 1% case in Weitzman’s article.  Some of this is simplified, but in all important respects it is by-the-book based on IPCC assumptions.

OK, so what does this tell us?  Well, we can do something interesting with this chart.   We have actually moved part-way to the right on this chart, as CO2 today is now at 385ppm, up from the pre-industrial 280ppm.  As you can see, I have drawn this on the chart below.  We have also seen some temperature increase from CO2, though no one really knows what the increase due to CO2 has been vs. the increase due to the sun or other factors.  But the number really can’t be much higher than 0.6C, which is about the total warming we have recorded in the last century, and may more likely be closer to 0.3C.  I have drawn these two values on the chart below as well.

Again, there is some uncertainty in a key number (e.g. the amount of historic warming due to CO2) but you can see that it really doesn’t matter.  For any conceivable range of past temperature increases due to the CO2 increase from 280-385 ppm, the numbers are no where near, not even within an order of magnitude, of what one would expect to have seen if the assumptions behind the other lines were correct.  For example, if we were really heading to a 10C increase at 800ppm, we would have expected temperatures to have risen in the last 100 years by about 4C, which NO ONE thinks is even remotely the case.  And if there is zero chance historic warming from man-made CO2 is anywhere near 4C, then there is zero (not 5%, not 1%) chance future warming will hit 10C or 20C.

In fact, experience to date seems to imply that warming has been under even the no feedback case.  This should not surprise anyone in the physical sciences.  A warming line on this chart below the no feedback line would imply negative feedback or damping in the climate system.  And, in fact, most long term stable physical systems are dominated by such negative feedback and not by positive feedback.  In fact, it is hard to find many natural processes except for perhaps nuclear fission that are driven by positive feedbacks as high as one must assume to get the 10 and 20C warming cases.  In short, these cases are absurd, and we should be looking closely at whether even the IPCC mean case is overstated as well.

What climate alarmists will argue is that these curves are not continuous.  They believe that there is some point out there where the feedback fraction goes above 100%, and thus the gain goes infinite, and the temperature runs away suddenly.  The best example is fissionable material being relatively inert until it reaches critical mass, when a runaway nuclear fission reaction occurs.

I hope all reasonable people see the problem with this.  The earth, on any number of occasions, has been hotter and/or had higher CO2 concentrations, and there is no evidence of this tipping point effect ever having occurred.  In fact, climate alarmists like Michael Mann contradict themselves by arguing (in the infamous hockey stick chart) that temperatures absent mankind have been incredibly stable for thousands of years, despite numerous forcings like volcanoes and the Maunder Minimum.  Systems this stable cannot reasonably be dominated by high positive feedbacks, much less tipping points and runaway processes.

Postscript:  I have simplified away lag effects and masking effects, like aerosol cooling.  Lag effects of 10-15 years barely change this analysis at all.  And aerosol cooling, given its limited area of effect (cooling aerosols are short-lived and so are geographically limited in area downwind of industrial areas) is unlikely to be masking more than a tenth or two of warming, if any.  The video below addresses all these issues in more depth, and provides more step-by-step descriptions of how the charts above were created

Update:  Lucia Liljegren of the Blackboard has created a distribution of the warming forecasts from numerous climate models and model runs used by the IPCC, with "weather noise" similar to what we have seen over the last few decades overlaid on the model mean 2C/century trend. The conclusion is that our experience in the last century is unlikely to be solely due to weather noise masking the long-term trend.  It looks like even the IPCC models, which are well below the 10C or 20C warming forecasts disused above, may themselves be too high.  (click for larger version) 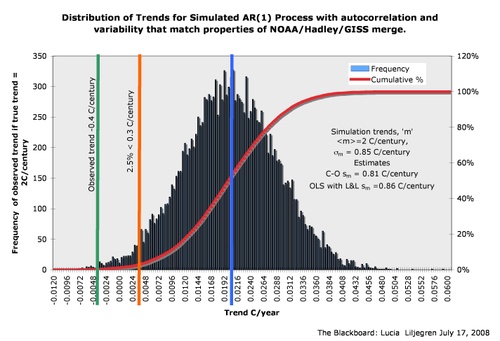 While Weitzman was looking at a different type of distribution, it is still interesting to observe that while alarmists are worried about what might happen out to the right at the 95% or 99% confidence intervals of models, the world seems to be operating way over to the left.