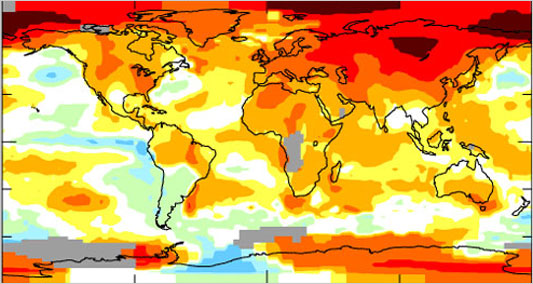 The description of the chart is as follows:

Flip your eyes between the two of them — already we see a huge visual difference in impression.  (Update:  better version here, using a tool from the GISS no less!) 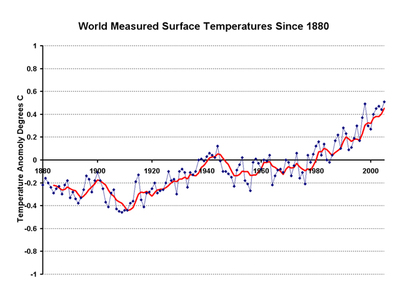 Hey, what do you know?  1950 to 1980 represents a low point in the trend.  Since they were trying to make a point about warming accelerating, then it might have made more sense to look at the warming since, say, 1998 — ie over the last decade.   Unfortunately, that chart would be all blue, since temperatures throughout this century have been lower than 1998.

How did they fill in all that grey area?  You tell me because Hansen certainly isn’t talking.

Satellite temperature measurement makes immensely more sense – it has full coverage (except for the poles) and is not subject to local biases.  Can anyone name one single reason why the scientific community does not use the satellite temps as the standard EXCEPT that the "answer" (ie lower temperature increases) is not the one they want?  Consider the parallel example of measurement of arctic ice area.  My sense is that before satellites, we got some measurements of arctic ice extent from fixed observation stations and ship reports, but these were spotty and unreliable.  Now satellites make this measurement consistent and complete.  Would anyone argue to ignore the satellite data for spotty surface observations?  No, but this is exactly what the entire climate community seems to do for temperature.

There is one area warming – the relatively small Antarctic Peninsula.  It should be orange in the map above (and is) but the rest of the orange in Antarctica is a mystery.  Though this would not be the first time people tried to extrapolate Antarctic trends from the tip of this peninsula (Gore did it in his movie and 60 minutes did it the other day).  This is a bit like measuring US temperature trends from Key West.  More on Antarctica here.  By the way, the GISS chart without all the extrapolation that I show only has the hot area on the penninsula.  All the other hot zones comes from, where?  James Hansen’s imagination?

Update:  Here is a similar map by satellite, which avoids the coverage issues as well as urban and other surface measurement biases.  The story here is much more interesting, particularly the very different experience between north and south, something not predicted by greenhouse gas theory.  One can see that there has definitely been warming, but mostly concentrated at the north pole. 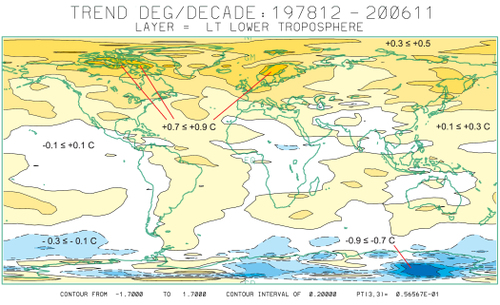 Here is the last monthly image, for December, 2007: 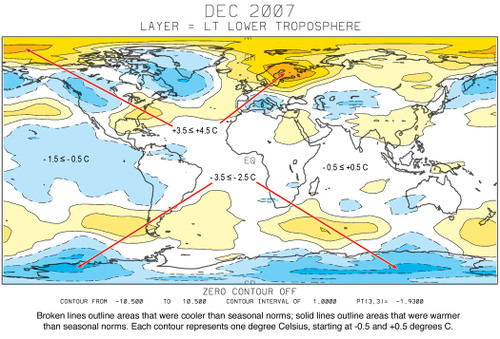 Update:  I have been getting a lot of new readers of late, including a number of commenters who disagree with me fairly strongly.  Welcome.  Here are some general thoughts: