Frequent readers will know that I have argued for a while that substantial biases exist in surface temperature records.  For example, I participated in a number of measurement site photo surveys, and snapped this picture of the measurement station in Tucson that has gotten so much attention: 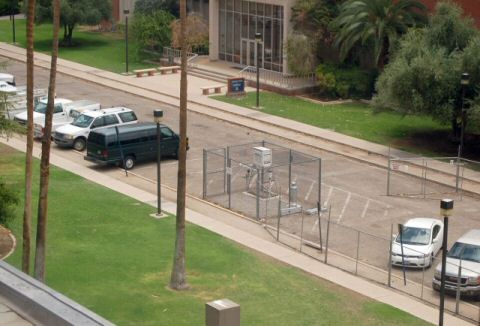 Global warming catastrophists do not want to admit this bias, because it would undermine their headlines-grabbing forecasts.  In particular, they have spent the last year or two bragging that their climate models must be right because they do such a good job of predicting history.  So what becomes of this argument if it is demonstrated that the "history" to which their models correlate so well is wrong?  (In fact, their models correlate with history only because they are fudged and plugged to do so, as described here).

Ross McKitrick, a Canadian economist, performs a fairly simple and compelling test on recent surface temperature records.  The chief suspected source of bias is from urbanization.  The weather station above has existed in Tucson in one form or another for 100 years.  When it was first in place, it sat in a rural setting near a small town characterized by horses and dirt roads.  Now it sits in an asphalt parking lot near cars and buildings, a block away from a power station, in the center of a town of a half million people.

Our new paper presents a new, larger data set with a more complete set of socioeconomic indicators. We showed that the spatial pattern of warming trends is so tightly correlated with indicators of economic activity that the probability they are unrelated is less than one in 14 trillion. We applied a string of statistical tests to show that the correlation is not a fluke or the result of biased or inconsistent statistical modelling. We showed that the contamination patterns are largest in regions experiencing real economic growth. And we showed that the contamination patterns account for about half the surface warming measured over land since 1980.

The half figure is an interesting one.  For years, it has been known that satellite temperature records, which look at the whole surface of the earth, both land and sea, have been showing only about half the warming as the surface temerpature records.  McKitrick’s work seems to show that the difference may well be in urban contamination of the surface data.

So how has the IPCC reacted to his work?  For years, the IPCC ignored his work and his comments on their reports.  Finally, in the last IPCC report they responded:

McKitrick and Michaels (2004) and [Dutch meteorologists] de Laat and Maurellis (2006) attempted to demonstrate that geographical patterns of warming trends over land are strongly correlated with geographical patterns of industrial and socioeconomic development, implying that urbanization and related land surface changes have caused much of the observed warming. However, the locations of greatest socioeconomic development are also those that have been most warmed by atmospheric circulation changes (Sections 3.2.2.7 and 3.6.4), which exhibit large-scale coherence. Hence, the correlation of warming with industrial and socioeconomic development ceases to be statistically significant. In addition, observed warming has been, and transient greenhouse-induced warming is expected to be, greater over land than over the oceans (Chapter 10), owing to the smaller thermal capacity of the land.

So the IPCC argues that yes, areas of high industrial and socioeconomic development do show more warming, but that is not because of urban biases on measurement but because of "atmospheric circulation changes" that happen to warm these same urban areas.  Now, this is suspicious, since Occam’s Razor would tell us to assume the most obvious result, that urbanization puts upwards bias on temperature readings, rather than on natural circulation patterns that happen to coincide with urban areas.

But it is more than suspicious.  It is a complete fabrication.  The report, particularly at the cited sections, has nothing about these circulation patterns either showing that they coincide with areas of economic growth or that they tend to preferentially warm these areas.   And does this answer really make any sense anyway?  A recent study in California showed warming in the cities, but not in the rural areas.  Does the IPCC really want to argue that wind patterns are warming just LA and San Francisco but not areas just 100 miles away?