A while back, I demonstrated how apparent increases in tornadoes in the US is entirely attributable to doppler radar and more storm observation points rather than any actual increase in tornadoes.  When one corrects for this measurement change, say by limiting the count only to very large tornadoes that were unlikely to escape detection even with older technology, the tornado count has actually gone down.

Steve McIntyre points out that the same effect exists for hurricanes.  In the early 1900’s, whole storms could easily be missed if no ship crossed paths with the storm and the storm never made landfall.  Better technology (e.g. satellites) bias current hurricane numbers upwards, but by how much.  In his post, he has a count of named Atlantic storms in just the last 20 years that would likely have escaped detection fifty years ago.  How many were there?

Frankly I was surprised. There are 52 storms on the list.That’s 52 out of the 252 storms in the official record, or 20% of the total. That’s 20% of the modern storms which lack a single classical (ship or shore) report of storm winds. Wow.

The obvious question is: how can one compare these satellite- and aircraft-based storms, which left no ship or shore evidence, with pre-1945 records which were based solely on ship and shore observations?

The result is a significant bias.  Below, he has only removed these 52 storms from the last 20 years.  Others post-WWII but before 1980 would have to be removed.  One can observe that nearly all of the increase in storms in the last half century seems to be due to this measurement bias, and not to, say, global warming: 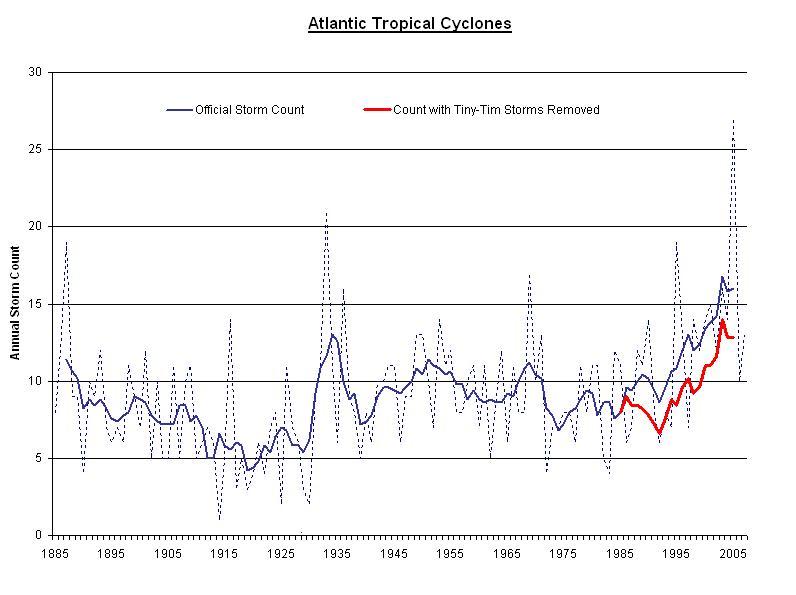