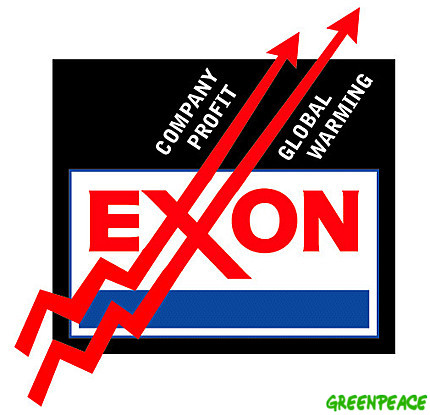 Gosh, its an amazing coincidence that the steps proposed to curb CO2 (reduce oil use, demonize oil companies, limit growth, increase government interventions in free economies, limit global trade) exactly match the political goals held by many leading climate catastrophists long before greenhouse gas theory was even born.  But I am sure its all about the science.  When I hear a climate catastrophist promoting nuclear energy to replace coal in electricity generation (the one no-brainer technology substitution we have available to us to reduce CO2 production), that is a person I can respect for their intellectual integrity.  Of course, I almost never hear it.

By the way, Greenpeace should have a picture of John D. Rockefeller,the founder of Standard Oil of New Jersey (and predecesor of Exxon) on the wall of every one of its offices.  Mr. Rockefeller and Standard Oil, by making Kerosene cheap and universally available as a luminant, did more than Greenpeace will ever do to save the whales.

Update:  The chart itself is kind of funny when you think about it.  It implies that increased prices for gas and oil, which increase profits, would also increase global warming.  But in fact, exactly the opposite is true.  As prices have risen, Exxon has made higher profits but demand has been reduced.  In fact, Exxon really "promoted" global warming the most in the 1980’s and 1990’s when they were making miserable profits and oil prices were low.

2 thoughts on “Scientific Analisis of the Day”