The suit was brought by landowners in Mississippi, who claim that oil and coal companies emitted greenhouse gasses that contributed to global warming that, in turn, caused a rise in sea levels, adding to Hurricane Katrina’s ferocity. (See photo of Bay St. Louis, Miss., after the storm.)

For a nice overview of the ruling, and its significance in the climate change battle, check out this blog post by J. Russell Jackson, a Skadden Arps partner who specializes in mass tort litigation. The post likens the Katrina plaintiffs’ claims, which set out a chain of causation, to the litigation equivalent of “Six Degrees of Kevin Bacon.”

The central question before the Fifth Circuit was whether the plaintiffs had standing, or whether they could demonstrate that their injuries were “fairly traceable” to the defendant’s actions. The defendants predictably assert that the link is “too attenuated.”

But the Fifth Circuit held that at this preliminary stage in the litigation, the plaintiffs had sufficiently detailed their claims to earn a day in court.

I can’t wait to hear the plaintiffs argument as to why U.S. CO2 emissions versus Chinese were the proximate cause of the damage..

I would add that it will be interesting to see how oil companies will be held at fault rather than their customers who actually burned the oil and created the CO2.

It will also be interesting to see plaintiffs explain this graph of accumulated cyclone energy in the light of their theory that man-made global warming is increasing hurricane strengths and frequencies  (ACE is a sort of integration of hurricane and tropical storm strengths over time).  (from here via WUWT) 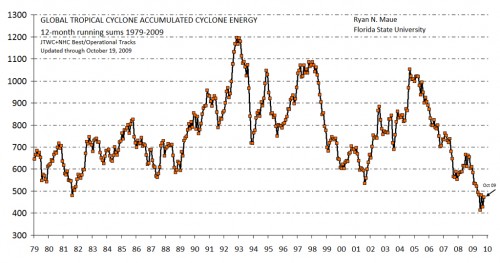