At the United Nations, whose general hostility to free speech is fairly well established, a proposal is on the table to allow the prosecution of people, like myself, who publicly disagree with the UN’s position on climate science:

The proposal for the United Nations to accept “ecocide” as a fifth “crime against peace”, which could be tried at the International Criminal Court (ICC), is the brainchild of British lawyer-turned-campaigner Polly Higgins.

The radical idea would have a profound effect on industries blamed for widespread damage to the environment like fossil fuels, mining, agriculture, chemicals and forestry.

Supporters of a new ecocide law also believe it could be used to prosecute “climate deniers” who distort science and facts to discourage voters and politicians from taking action to tackle global warming and climate change.

“Few challenges facing America — and the world – are more urgent than combating climate change,” he says in the video. “The science is beyond dispute and the facts are clear. Sea levels are rising. Coastlines are shrinking. We’ve seen record drought, spreading famine, and storms that are growing stronger with each passing hurricane season. Climate change and our dependence on foreign oil, if left unaddressed, will continue to weaken our economy and threaten our national security.

From Ryan Maue of FSU comes accumulated cyclonic energy, the best single metric of the strength of hurricane seasons: 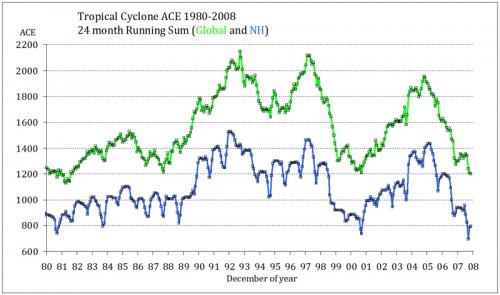 Coming soon, Obama tells that story about this guy he knows who swears his grandmother tried to dry her cat by putting it in the microwave.

Investors Business Daily has a great article reinforcing the point many of us have been making for a while:  The Marxists and anti-globalization rioters and other left-wing extremists that have seemed awfully quiet of late have not disappeared;  they have repackaged themselves as global warming activists, but their goals are exactly the same.

The driving force of the environmental movement is not a cleaner planet — or a world that doesn’t get too hot, in the case of the global warming issue — but a leftist, egalitarian urge to redistribute wealth. A CO2 tax does this and more, choking economic growth in the U.S. and punishing Americans for being the voracious consumers that we are.

Eco-activists have been so successful in distracting the public from their real intentions that they’re becoming less guarded in discussing their ultimate goal.

"A climate change response must have at its heart a redistribution of wealth and resources," Emma Brindal, a "climate justice campaign coordinator" for Friends of the Earth Australia, wrote Wednesday on the Climate Action Network’s blog.

In this case, redistribution would be handled by the Multilateral Adaptation Fund, an agency that would use the carbon tax receipts to help countries that are having to deal with climate change.

Since the "complete list of things caused by global warming" now exceeds 600 (see our "Chilled By The Heat" editorial, Dec. 13), there would be few if any limits on the U.N.’s ability to move riches from countries that have created and earned them to those that have done neither.

Still think this is all about halting climate change? We would go as far as to say that anyone who does is either naive or a dupe. Both the rhetoric and the behavior of the eco-activists back us up.

The “Greens” are no more interested in clean air and water today than the Soviets were in liberty when they rolled tanks into Prague in 1968. We dismiss them as “silly” at our own peril.