Blogging has been really light here because

However, while I am a bit dormant, this is a nice interview with John Christy.   Not a ton new here for frequent readers of science-based skeptic sites.

I must have had 50 people mail me various versions of the NY Times story on the citizens of Newtok, Alaska who had to abandon their homes due to melting permafrost that made their structures unstable.  Most of the emails came with a message such as “explain this away, skeptic boy.”

Generally I had two answers:

Greg Schiller covers this ground, and more, as he reveals that the real culprit in Newtok appears to be normal everyday riverbank erosion, and a state government that insisted on building a town in this particular location.

Since the level of CO2 and other well-mixed GHG is on the rise, the overall accumulation of heat in the climate system, measured by ocean heat, should be fairly steady and uninterrupted (monotonic) according to IPCC models, provided there are no major volcanic eruptions.  According to the hypothesis, major feedbacks in the climate system are positive (i.e., amplifying), so there is no mechanism in this hypothesis that would cause a suspension or reversal of overall heat accumulation.  Indeed, any suspension or reversal would suggest that the heating caused by GHG can be overwhelmed by other human or natural processes in the climate system….

[The] use of surface air temperature as a metric has weak scientific support, except, perhaps, on a multi-decadal or century time-scale.  Surface temperature may not register the accumulation of heat in the climate system from year to year.  Heat sinks with high specific heat (like water and ice) can absorb (and radiate) vast amounts of heat.  Consequently the oceans and the cryosphere can significantly offset atmospheric temperature by heat transfer creating long time lags in surface temperature response time.  Moreover, heat is continually being transported in the atmosphere between the poles and the equator.  This reshuffling can create fluctuations in average global temperature caused, in part, by changes in cloud cover and water vapor, both of which can alter the earth’s radiative balance.

One statement in particular really opened my eyes, and made  me almost embarassed to have focused time on surface temperatures at all:

For any given area on the ocean’s surface, the upper 2.6m of water has the same heat capacity as the entire atmosphere above it

Wow!  So oceans have orders of magnitude more heat capacity than the atmosphere.

The whole article is a good read, but his conclusion is that estimates of ocean heat content changes appear to be way off what they should be given IPCC models: 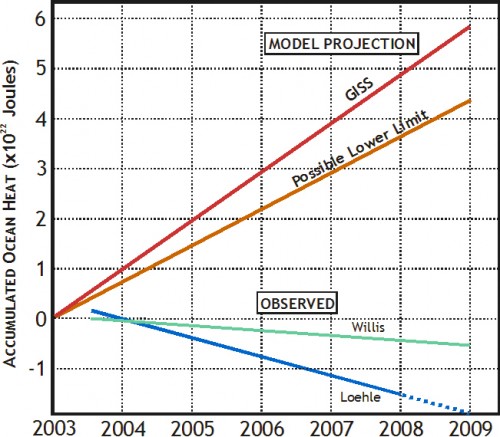 The article attached was necessarily a summary, but I am not totally convinced he has accounted for phase change sufficiently.  Both an increase in melting ice as well as an increase in evaporation would tend to cause measured accumulated heat in the oceans to be lower than expected.   He uses an estimate by James Hansen that the number is really small for ice melting (he does not discuss evaporation).  However, if folks continue to use Hansen’s estimate of this term to falsify Hansen’s forecast, expect Hansen to suddenly “discover” that he had grossly underestimated the ice melting term.

Anthony Watt has produced a report based on his excellent work at SurfaceStations.org document siting and installation issues at US surface temperature stations that might create errors and biases in the measurements.  The work is important, as these biases don’t tend to be random — they are much more likely to be upwards rather than downwards biases, so that they can’t be assumed to just average out.

We found stations located next to the exhaust fans of air conditioning units, surrounded by asphalt parking lots and roads, on blistering-hot rooftops, and near sidewalks and buildings that absorb and radiate heat. We found 68 stations located at wastewater treatment plants, where the process of waste digestion causes temperatures to be higher than in surrounding areas.

In fact, we found that 89 percent of the stations – nearly 9 of every 10 – fail to meet the National Weather Service’s own siting requirements that stations must be 30 meters (about 100 feet) or more away from an artificial heating or radiating/ reflecting heat source.

In other words, 9 of every 10 stations are likely reporting higher or rising temperatures because they are badly sited. It gets worse. We observed that changes in the technology of temperature stations over time also has caused them to report a false warming trend. We found major gaps in the data record that were filled in with data from nearby sites, a practice that propagates and compounds errors. We found that adjustments to the data by both NOAA and another government agency, NASA, cause recent temperatures to look even higher.

The conclusion is inescapable: The U.S. temperature record is unreliable. The errors in the record exceed by a wide margin the purported rise in temperature of 0.7º C (about 1.2º F) during the twentieth century. Consequently, this record should not be cited as evidence of any trend in temperature that may have occurred across the U.S. during the past century. Since the U.S. record is thought to be “the best in the world,” it follows that the global database is likely similarly compromised and unreliable.

I have performed about ten surveys for the effort, including three highlighted in the report (Gunnison, Wickenberg and the moderately famous Tucson site).  My son did two surveys, including one in the report (Miami) for a school science fair project.

I try really, really hard not to get pulled into the ad hominem attacks that fly around the climate debate.  So the following is just for fun on a Friday, and is not in any way meant to be a real climate argument.  However, since so many alarmists like to attack skeptics as being anti-science, I thought I would have a bit of fun.

This diagram was spurred by this post from Reason’s Radley Balko:

The Science Blogs are having fun with the “wellness editor” at the Huffington Post, a woman who claims to have a “doctorate in homeopathic medicine.” An odd choice for a lefty website that makes such hay of the right’s hostility to science. I like this comment: “…a doctorate in homeopathic medicine would be a blank piece of paper soaked in a 1:10,000,000 tincture made from the ink of an actual doctor’s diploma.”

Just to head off the obvious, I have no doubt a similar Venn diagram could be created for skeptics and people who believe the world is only 4000 years old.  Both arguments are equally meaningless when it comes down to whether the science is correct.