Ed Caryl has an good post correlating most of the measured warming in the Arctic with urban heat islands near key temperature stations.  He goes on to show that 15 stations with heat island effects near the station show substantial warming, while 9 stations without such effects show little or no warming (in fact show annual temperatures amazingly correlated with the Atlantic Multidecadal Oscillation, or AMO); 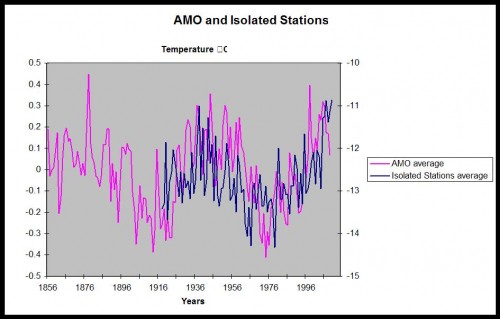 Here is what I do not like about his work, at least as I understand it — I would greatly prefer to see this work done on some sort of double-blind system.  One group, without any knowledge of station temperature numbers, sorts the stations while another works on the temperature trends.  This way there is no danger of the sorting decisions being pre-biased by knowledge of their characteristics (something that arguably happens all the time in dendro-climatology).

I was in Italy on my 20th anniversary, so I am not that sorry about not paying attention to my blog, but I am caught up now.

I will be on the radio today between 3-4 Arizona time (6-7pm Eastern time) talking about climate change.  Folks in Arizona can find it at 1100AM or listen streaming here.