Note Updates at the Bottom.  Could we please agree to actually read the whole post and the updates before commenting?  All commenters welcome, and I never delete comments except in the case of outright advertisement spam

This is a project my son did for Science Fair to measure the urban heat island effect in Phoenix.  The project could also be called "Disproving the IPCC is so easy, a child could do it."  The IPCC claims that the urban heat island effect has a negligible impact, even on surface temperature stations located within urban areas.  After seeing our data, this claim will be very hard to believe.

In doing the test, we tried to follow as closely as possible the process used in the Nyuk Hien Wong and Chen Yu study of Singapore as published in Habitat International, Volume 29, Issue 3 , September 2005, Pages 547-558.  We used a LogTag temperature data logger.  My son used a map and a watch to mark our times, after synchronizing clocks with the data logger, so he could match times to get temperature at each location.  I called out intersections as we passed them and he wrote down the times.  At the same time, I actually had a GPS data logger where I gathered GPS data for location vs. time, but I did not share this with him because he wanted to track locations himself on the map.  My data below uses the GPS data, which was matched with the temperature data in an Excel spreadsheet using simple Vlookup calls.

To protect the data logger from the 60mph wind  (we tried to drive at exactly 60 so my son could interpolate distances between intersections) we put the datalogger in a PVC Tee: 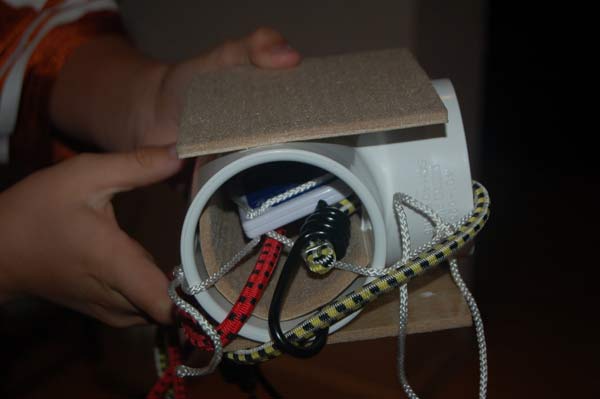 We added some insulation to reduce the effect of heat from the car’s roof, and then strapped the assembly to the roof with the closed part of the Tee facing forward (the nose of the car is to the left in this picture). 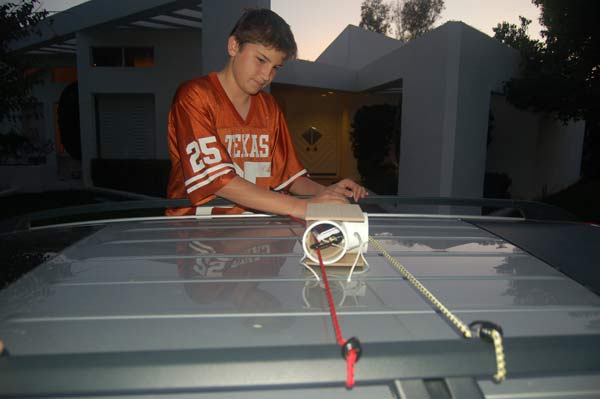 We drove transects two nights in a row.  Both nights were cloudless with winds below 5 mph.  Ideally, we would have driven between midnight and 6 AM, but this was my kid’s science project and he needs to get to bed so we did it from about 9PM to 11PM.  We were concerned that the air might still be cooling during the test, such that as we drove out from town, it might be easy to mix up cooling with time and cooling with location.  Our idea for correcting this was to drive and gather data on an entire loop, starting in the center of town, going about 30 miles out, and then returning to the starting point.  That way, with data taken in both directions, the results could be averaged and the cooling rate would cancel out.  As it turned out, we didn’t even bother to do the averaging.  The two trips can be seen in the plots, but the urban heat island shows through pretty clearly in the data and the slope of the line between temperature and distance was about the same on the inbound and outbound legs.

I used the GPS lat/long points to calculate the distance (as the crow flies) from the center of town (My son did it the hard way, using a tool on Google maps).

The first night we went north (click to enlarge):

The second night we went south.  The urban profile going south is a little squirrellier, as the highway we were traveling tends to dip in and out of the urbanization.

Here is the total route over the two nights.  I’m still trying to figure out the best way to plot the temperatures on the map (again, click to enlarge) 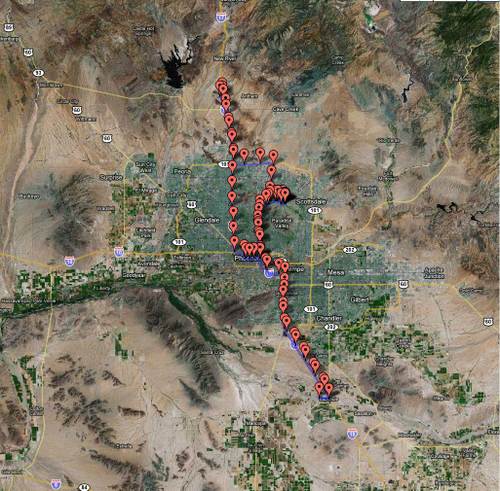 You can see the results.  Even at the too-early time of 9-11PM, the temperature fell pretty linearly by about 0.2-0.3 degrees F per mile from the city center (as the crow flies).

I would really love to do is to go down to Tucson and run this same test starting at the USHCN weather station there and driving outwards.  That may have to wait a few weeks until my job calms down a bit.

Update:  Per some emails I have received, it is theoretically possible for the urban heat island effect to be real and to have integrity in the surface temperature record.  The first way this could happen is if the official measurement stations are well sited and outside of growing urban heat islands.  I know for a fact by direct observation that this is not the case.  A second way this might be the case is if one argues that urban heat islands exist but their effect is static over time, so that they may bias temperatures but not the warming signal.  I also don’t think this is very credible, give growth of urban areas over the last 50 years.

A better argument might be that because most US temperature stations are arriving at daily temperature averages from just measuring daily min and max temperatures.  It might be arguable that while urban temperatures cool more slowly at night, they still reach the same Tmin in the early morning as the surrounding countryside.  Unfortunately, I do not think this is the case — studies like this one taken at 5AM have seen the same results.  But this is something I may pursue later, redoing the results at whatever time of day Phoenix usually hits its minimum temperature.

A good argument for the integrity of the surface temperature measurement system is NOT that scientists blind to local station installation details can use statistical tools to correct for urban biases.  After looking at two stations in the Arizona area, one urban (Tucson) and one rural (Grand Canyon) it appears the GISS statistical method, whatever this double-secret process may be [insert rant about government-funded research by government employees being kept secret] it actually tends to average biased sites with non-biased sites, which does nothing to get the urban bias out of the measured surface warming signal – it just spreads it around a little.  It reminds me a lot of my kids spreading the food they don’t like in a thin layer all over the plate, hoping that it will be less noticeable than when it sits in one place in a big pile.

Again, I have not inspected their procedure, but looking at the results there seems to be a built-in assumption in the GISS algorithms that they expect an equal chance of a site being biased upwards vs. downwards.  In fact, I seem to see more GISS corrections fixing imagined downwards biases than upwards biases.  I just don’t see how this is a valid assumption.  The reality is that biases in outdoor temperature measurement are much more likely to be upwards than downwards, particularly over the last 50 years of urbanization and even more particularly given the fact that the preferred measuremnt technology, the MMTS station, has a very very short cable length that nearly gaurantees an installation near buildings, pavement, etc.

Update #2:  To this last point, consider this situation:  Thermometer one in the city shows 2 degrees of warming.  Thermometer two a few hundred kilometers away shows no warming.  Someone aware of urban biases without a dog in the hunt would, without other data to guide them, likely put their money on the rural site being correct and the urban site exaggerated or biased.  The urban site should be thrown out, not averaged in.  However, the folks putting the GISS numbers together are strong global warming believers.  They EXPECT to find warming, so when looking at the same situation, absolutely sure in their hearts there should be warming, the site with the 2 degrees of warming looks correct to them and the no warming site looks anomalous.  It is for this reason that the GISS methodology should be as public as possible, subject to full criticism by everyone.

Update #3:  I know that many commenters see one line or even a title to a post and jump to the comment section to bang out their rebuttal without reading the post. I typcally do not respond to such folks, but there are just so many here I feel the need to say:  Yes, the IPCC knows urban heat islands exist.  What I said, and I think it is true, is that the IPCC does not believe urban heat islands substantially bias the surface temperature record, and, if they do, their effect can be statistically corrected by approaches like that used by the GISS and discussed above in Update #1.  I admit that this experiment alone, even if the quality was perfect, would not disprove that notion, but it has to make one suspicious (skeptical, even?)  By the way, if you want to yell "Peterson!" at this point, see here.  The volume of interest, pro and con, on this post I think is going to motivate me to go down to Tucson and run the same test with this USHCN station as the urban starting point, and then we’ll see.

By the way, my point is clearly not, as some skeptical supporters might make out, that urban heat biases in surface temperature measurement account for all historical warming.  Clearly that is not true, as satellites, which do not have this urban bias problem, have measured real global warming, though at a lower rate than the surface temperature record.

Update #4:  To some of you commenters:  give me a break.  This is a junior high school science project funded with a $65 temperature logger and a half tank of gas.  I am sure the error bars are enormous and the R-squared probably has little meaning  (to tell the truth, Excel just put it there when I asked it to draw a trend line through the data).  Some of the data on the second run in particular looks weird to me and I would want to do a lot more work with it before I presented it to my PhD review board.  That being said, I would be happy to put it in front of said board next to the typical junior high baking soda and vinegar volcano project.

Given our constraints, I think we did a moderately thoughtful job of structuring the project– better, in fact, than the published Singapore study we emulated.  In particular, the fact that we did the run both ways tends to help us weed out the evening cooling effect as well as any progressive heating effect from the car itself.  I honestly had zero idea what we would find when we downloaded the data to the computer.  I kind of thought it would be a mess — remember, we were not really doing this at the right time of day.   It was not until my son did the charts using his position log he took by hand that I thoughy, "wow, there is a big effect here."   That is when I decanted the data from my GPS logger to check his results using a little more accurate position vs. time data and produced the charts here.  As I said, I really should have averaged position data for the forward and reverse runs, but I think the charts were fairly compelling.

Update #5:  The other half of my son’s project was to participate in the SurfaceStations.org survey of USHCN temperature stations.  He did a photo survey of two sites.  Below is a picture from the USHCN station at Miami, AZ.  Left as an exercise to the commenters who are defending the virtue of the US surface temperature netork:  Explain how siting the temperature instrument within six feet of a reflective metal building that is perfectly positioned to reflect the afternoon sun from the SW onto the instrument does not introduce any measurement biases.  As extra credit, explain why the black gravel and asphalt road and the concrete building 6 feet away don’t store heat in the day to then to warm up the air around the instrument at night as the heat re-radiates. 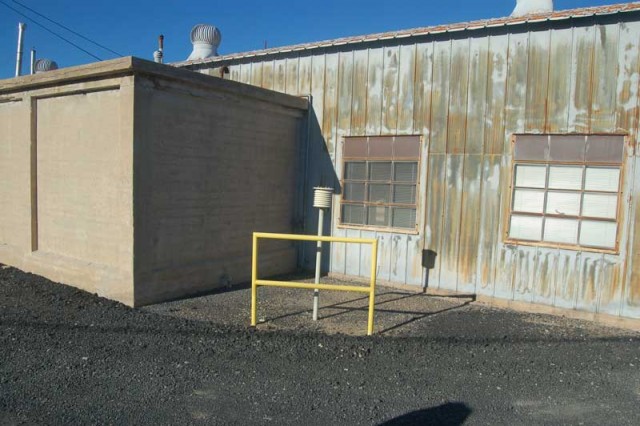