OK, here is a great example of the media blithely accepting panicky catsrophism where none is warranted (Link HT to Maggies Farm)

Scientists welcomed Ban Ki Moon to Antarctica with a glass of Johnny Walker Black Label served “on the rocks” with 40,000-year-old polar ice. But the researchers delivered an alarming message to the UN Secretary-General about a potential environmental catastrophe that could raise sea levels by six metres if an ice sheet covering a fifth of the continent crumbles.

The polar experts, studying the effects of global warming on the icy continent that is devoted to science, fear a repeat of the 2002 collapse of the Larsen B ice shelf. The 12,000-year-old shelf was 220 metres (720ft) thick and almost the size of Yorkshire.

“I was told by scientists that the entire Western Antarctica is now floating. That is a fifth of the continent. If it broke up, sea levels may rise as much as six metres,” Mr Ban said after being briefed at the Chilean, Uruguayan and South Korean bases during a day trip to King George Island, at the tip of the Antarctic Peninsula. …

Eduardo Frei Montalva Air Force Base, a year-round settlement of corrugated-iron cabins belonging to Chile, lies in one of the world’s worst “hot spots” – temperatures have been rising 0.5C (0.9F) a decade since the 1940s.

I don’t even know where to start with this.  So I will just fire off some bullets: 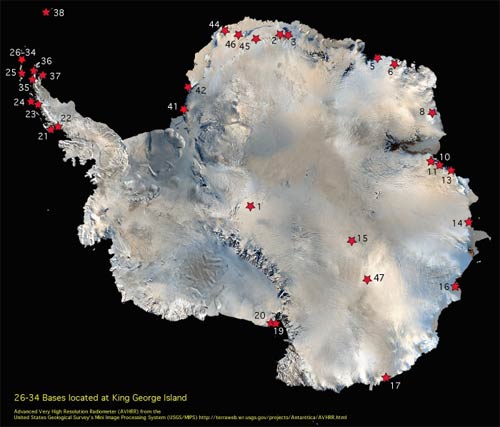 As always, you can consult my my book and my movie (both free online) for more details on all these topics.

5 thoughts on “Anatomy of a False Panic”