Arctic Sea ice and Greenland glaciers have been on a slow retreating trend for decades, perhaps centuries (at least since the little ice age).  This should not be surprising.  First, glaciers all around the world have been steadily retreating since 1800:

Also, the Arctic has been the hot spot of the world over the last 30 years or so: 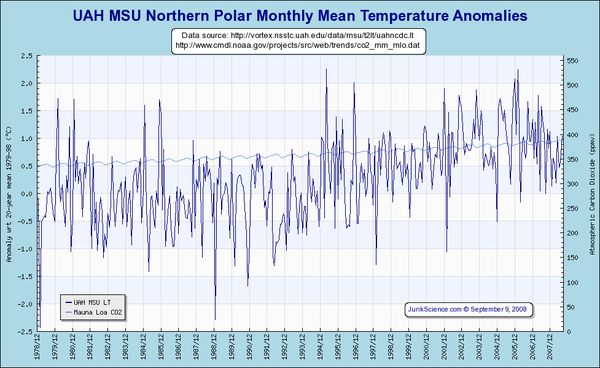 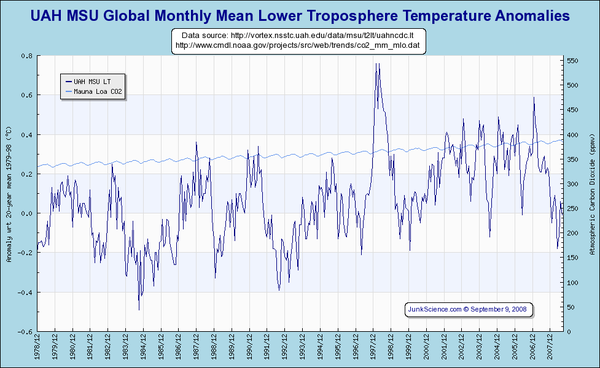 So the question is not necessarily why Arctic Sea ice continues to retreat – this appears part of a long term trend that in fact pre-dates things like, say, man’s production of substantial amounts of CO2.  But the more worrisome question has been, why has this retreat seemed to have accelerated the past several years: 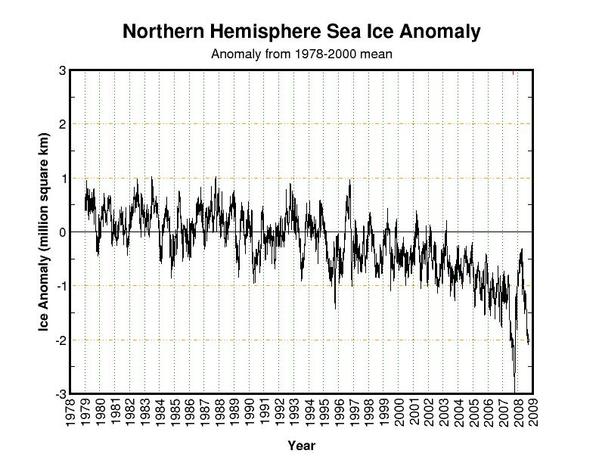 Its hard to fully correlate recent activity with Arctic temperatures.  In fact, in the last three or four years (see above) we have seen decreasing Attic temperatures, not increasing ones.  But never-the-less, this ice picture is often used as exhibit #1 to prove anthropogenic warming.  The "tipping point is near" cry supporters of the theory that Earth’s climate, unlike nearly every other long-term stable natural system, is dominated by positive feedback (and ignoring anecdotal evidence that the Arctic experienced similar melting in the 1930s).

Well, last year, there was some preliminary findings form NASA that said that the unusual low ice pack in 2008 may have been due to shifting wind patterns.  Now, Anthony Watts points us to two new studies that both conclude something other than global warming and CO2 may be behind recent ice pack trends in the Arctic.

Observations over the past decades show a rapid acceleration of several outlet glaciers in Greenland and Antarctica1. One of the largest changes is a sudden switch of Jakobshavn Isbræ, a large outlet glacier feeding a deep-ocean fjord on Greenland’s west coast, from slow thickening to rapid thinning2 in 1997, associated with a doubling in glacier velocity3. Suggested explanations for the speed-up of Jakobshavn Isbræ include increased lubrication of the ice-bedrock interface as more meltwater has drained to the glacier bed during recent warmer summers4 and weakening and break-up of the floating ice tongue that buttressed the glacier5. Here we present hydrographic data that show a sudden increase in subsurface ocean temperature in 1997 along the entire west coast of Greenland, suggesting that the changes in Jakobshavn Isbræ were instead triggered by the arrival of relatively warm water originating from the Irminger Sea near Iceland. We trace these oceanic changes back to changes in the atmospheric circulation in the North Atlantic region. We conclude that the prediction of future rapid dynamic responses of other outlet glaciers to climate change will require an improved understanding of the effect of changes in regional ocean and atmosphere circulation on the delivery of warm subsurface waters to the periphery of the ice sheets.

28 thoughts on “Arctic and Greenland Ice”