Though not particularly relevent to discussion one way or the other about long-term warming trends, world temperatures in April appear to again be relatively cool.  More intresting is the satellite-measured temperature trend for the last decade, which looks pretty flat (and this before shift of the PDO to its cool phase, probably this year). 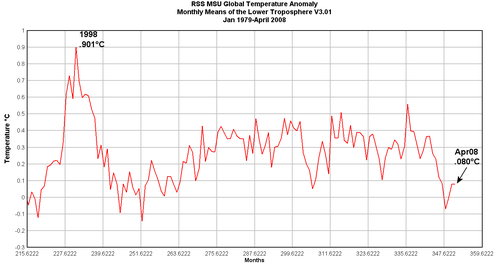 Global warming theory as reported by the last IPCC predicted that the most warming was predicted for the middle troposphere over the tropics.  Its hard to see any warming in this region even over the last 30 years.  With no apparent warming in the sourthern hemisphere, "global" warming seems to be limited in the last 30 years to the Northen Hemisphere outside the tropics, and even this warming has stopped over the last 10 years.

18 thoughts on “Where did that Warming Go?”